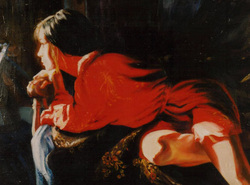 Laurie Harden is an illustrator and painter, and has been, it seems, all her life. It is her first love and abiding passion. She works in Oils, Gouche, Pastels, Charcoal & Pencil.

Laurie studied at Kansas City Art Institute and Rhode Island School of Design where she graduated with a BFA in Illustration. She resides in Northern New Jersey. Her work is widely exhibited, awarded, commissioned and collected. An artist with a international clientele, she also teaches art privately and at several art associations.

ARTIST'S STATEMENT
I endeavor to capture people and places as they are at the moment. I strive to portray the emotions and concerns that traverse all cultures, societies and races. I am fascinated by the ethnic and cultural differences while embracing the universality that connects all of mankind despite the differences.

I try to express more than a physical likeness. Whether it is a mood passing over a face, or an atmospheric change that settles over a landscape, there is an aura that is radiated. This aura is as much a part of the person or place as their out right appearance. It is this totality of persona that I strive to preserve in my figurative and scenic works.

I‘m compelled to paint, to try to understand the way light falls on a person or object  & depict  it.  I wish to express the mood or fleeting emotion of a scene in such a way that the viewer can experience the feeling that captured me and caused me to put brush to canvas.